How have our foodways sculpted the planet? This culinary event offers eaters a chance to explore recipes and taste-test research about the genomes and biotechnologies that make up the human food systems of planet Earth.

In collaboration with Gorilla Meats Meat Club and Heather Julius from Special Snowflake Supperclub, the Center will serve a six-course meal, creating a delicious synthesis of Genomic Gastronomy research undertaken over the past year. Join us in following the journey of edible genomes that have traversed the globe in the last 400 years.

To attend, book your seat by emailing:
info@genomicgastronomy.com

Limited places available, and will be allocated on a first come, first serve basis.

This Sunday the Center spent the day at Church! a semi-regular gathering of artists, crafters and entrepreneurs, in Portland, Ore., Or as the organizers write:

A ritualistic Sunday gathering to open dialogue in Portlandâ€™s creative community and expand on the narrow avenues that already exist for showing work. A gathering where nothing is sold, CHURCH! is a free space for sharing ideas and intermingling between artists working in a multitude of different medias.

Thanks to our good friends The Gorilla Meats Co. for helping organize the event and 220 salon for hosting everyone.

As part of the event we had a Qualifying round for this weeks Cheese Wrestling event. The competition was a local bracket and the three cheeses that we pitted against each other were from these Pacific Northwest creameries:

If you would like to find out who won, and enjoy ten more rounds of tenacious cheeses battling for the attention of your taste buds come to Gallery Homeland this Friday at 6 PM in Portland, OR.

And some images from The Gorilla Meats Co. who served their Cheeky Thai sausage.

OK, class, it’s time to get educated on hops, and your teacher is Jim Koch.

Koch, founder and brewer at Samuel Adams, has released a new 12-pack that will help educate everyone on the various flavors different hops can bring to a beer with the Latitude 48 Deconstructed 12-pack.

“We’ve always tried to educate people about hops; their terroirs (the area they are grown), their differences and the roles they play in the beer,” said Koch. “This was taking the hop education to the next level.”

Koch originally got the idea a few months ago. He said he was drinking the Latitude 48 and he said he was trying to “mentally disentangle” what flavors each of the hops brought to the beer.

“I said to myself, ‘Wouldn’t that be a cool thing to do?”‘ said Koch. “I was thinking of doing it for fun. That was basically the idea. There wasn’t a lot of planning behind it.”

The Latitude 48 is a little different than a lot of American IPAs in that it uses not only American hops, but hops from both England and Germany.

The American hops used are Ahtanum, Simcoe and Zeus. The English hop is East Kent Goldings and the German hop is Hallertau Mittelfruh.

The different in hops, particularly between the American and European hops, was exactly what Koch said he wanted to demonstrate to beer drinkers.

“It was really an unique opportunity to really showcase the differences between the three terroirs,” he said.

The five single-hop beers were the same exact recipe as the original Latitude 48 except for the hops. A different amount of hops had to be used in each beer to match the original’s 65 international bittering units (a measure of how bitter a beer is).

The Hallertau Mittelfruh hop is the one Samuel Adams uses in most of its beers. It’s considered a “noble hop” and brings what Koch calls a “very elegant, soft, citrus floral” aroma and flavor to the beer.

It was Koch’s favorite of the single hops.

“To me it stood out as being very pleasant,” he said. “It had nothing that you wanted to calm down in its flavor profile. It’s almost impossible to use too much of it. It’s so smooth and complex. It doesn’t have a note that you want to remove. It’s the purest example to me of what you want hops to contribute to your beer.”

The East Kent Goldings version should be “earthy, herbal, geranium” and a little “tangy,” he said.

As for the American hops, they all had one similarity: they have what are called “catty” notes in it. I call it cat pee.

Some flavors, by themselves can be harsh, or even unpleasant, but blended together with other flavors they can work well. Such is the case with Simcoe, which is well-known to cause cat urine aroma when it’s by itself. That smell really comes through in the single-hop version of the beer.

The cattiness is dialed down in the Zeus, although it is still there. There are also flavors of grapefruit and pine in the Zeus version.

The Ahtanum was probably the best of the three American hop beers.

Overall, Koch said he still prefers the original Latitude 48, because all of the hops work together to create a harmony of flavors.

But the Latitude 48 Deconstructed is still an interesting experiment, and a great way to see the different hop flavors. It is also affordable, under $20 for a 12-pack.

“It was a lot of fun to really isolate the individual contributions each hop made,” said Koch. “We wanted to make it accessible to people and we didn’t want them to say, ‘I want to try it, but I can’t afford it.’ The purpose of this was education.” 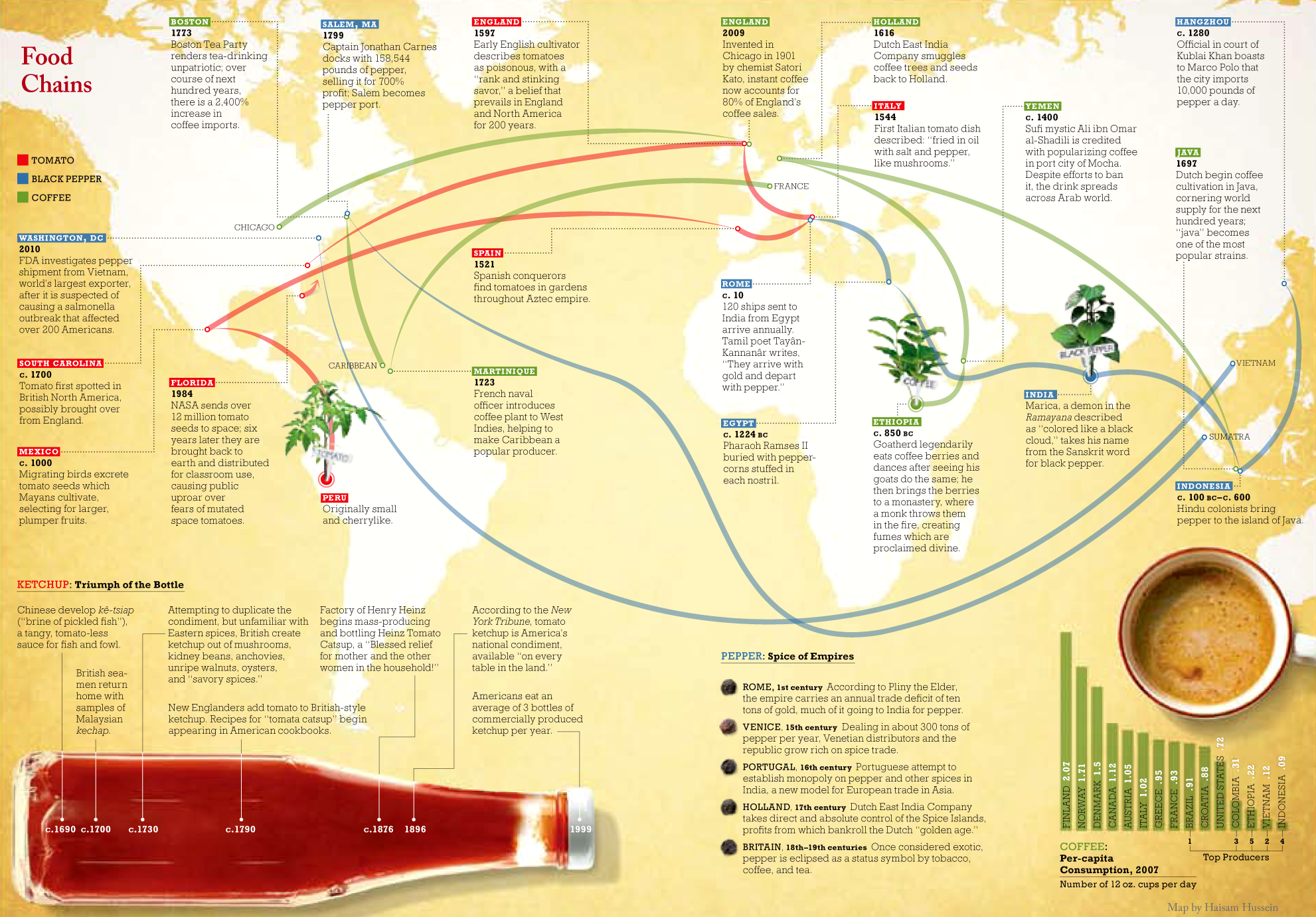 From the Agricultural Biodiversity Weblog via Lapham’s Quarterly:

No, those aren’t the ingredients for some kind of wacky new dish. But they do offer some insights into the global realpolitik and social status of the food bizniss, past and present.

This map is great for our upcoming “Planetary Sculpture Supper Club” event.

The Center for Genomic Gastronomy has recently received an identity redesign by our campaign strategist.

The new logo uses a typeface called Mercury. Although chosen for it’s clear gestures and subtle quirks, this typeface also has an interesting history. It was developed by the amazing foundry Hoefler & Frere-Jones for the New Times, an American newspaper that is sold nationally, but printed locally. In order to create a standardized publication throughout the country, varying versions were developed that had the same overall height and width, to account for different climactic printing conditions.

The foundry calls these variations ‘grades’: “sibling members of a type family that shared the same underlying geometry, but offered different degrees of darkness on the page. (Unlike the weights of a type family, which grow progressively wider as they get bolder, a font’s grades increase in color without affecting copyfit.)” Essentially, the newspaper can be printed in Miami where it is humid and hot, using less ink to create the same appearance as the heavier grade printed in a dryer region, such as Phoenix. The result is a regionally flexible type family.

The Mercury typeface is well suited for the Center for Genomic Gastronomy, a reminder that designing for resilience and biodiversity requires a thorough consideration of local and regional factors; climactic, cultural, political and economic. We’re keen to chart other examples of bioregional design, so let us know if you have any good examples!